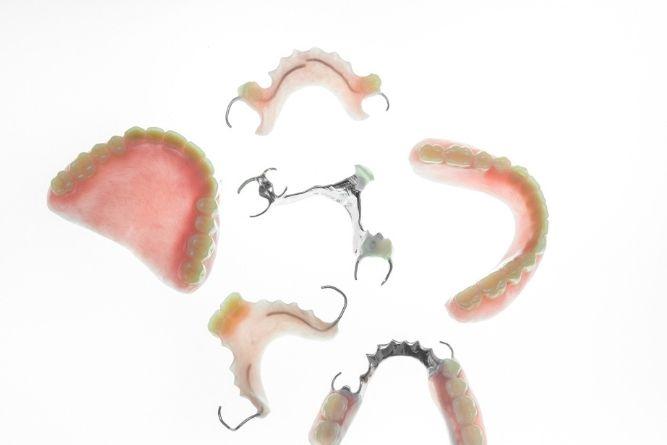 When thinking about dentures, the first image that comes to mind might be George Washington’s famed wooden teeth. What you may not know is that he never had wooden dentures at all, they were carved ivory!

Dentures date back further than you may think. It’s incredible to see how far dental care has come over the decades, especially the progression of dentures. Today, the need for dentures has decreased, but you might be wondering just how far back dentures have appeared throughout history.

Some of the oldest dentures,  found in Mexico, date back to 2500 BC. When these false teeth were excavated, they were found to be made of wolf teeth. No wiring was used; the wolf teeth were simply placed in the empty sockets of a person’s missing teeth.

The Romans, Greeks, and Etruscans were all found to have practiced similar false teeth methods as the Egyptians. The Etruscans made dentures from a mixture of bone, gold wire, and repurposed human and animal teeth.

In the history of 16th century Japan, the use of wooden dentures began to be more common. Nakaoka Tei, who was a priestess of an ancient temple in Kii, was known to have had wooden teeth (unlike President Washington). The method of crafting these wooden dentures was done by using softened beeswax to make an impression on the person’s teeth. The wood was then carved to match the impression and placed on a mouthguard made of beeswax.

In 1770, the first porcelain dentures were made by Alexis Duchâteau, who had initially had dentures made of ivory but found they began to rot. Duchâteau teamed up with a dentist named Nicholas Dubois De Chemant, and they both managed to improve porcelain for dentures. Porcelain dentures became patented in 1791 and became a common go-to afterward.

There was a time when dentists’ suppliers turned to grave robbing to find teeth for dentures. Despite access to porcelain dentures, the demand for false teeth had begun to grow. People had started to consume more sugar, which led to teeth being pulled and resulted in a higher demand for tooth replacements.

In 1815, tooth hunters flocked to the casualties of the Battle of Waterloo for a fresh supply of teeth. The thousands of fallen soldiers had their teeth removed and repurposed to match the high demand. Eventually, stealing teeth from the dead became unlawful, so the popularity of human dentures died out.

Acrylic and rubber compounds were introduced into the construction of false teeth. Today, modern dentures are made from acrylic resin, which is the most common material used in crafting dentures. Acrylic resin dentures are meticulously made, and they blend in perfectly with your other teeth, hiding the fact that you have dentures.

It’s impressive to see how far the science of dentures and dentistry has come. Whether you need tooth fillings, dental implants, or dentures, Fresh Dental has you covered. If you’re dealing with a dental issue, make an appointment with our dental office today and walk out with a smile.

Looking to book an appointment with us?